Glass has been synonymous with art since its very beginning. And it continues to be used to define a new generation of buildings today, creating exciting public spaces, which combine both form and function.

This is epitomised in the design of ‘Highway 407’, Vaughan, just North of Toronto. Sitting within the Toronto commuter-belt, the city is one of Canada’s fastest growing and Highway 407 is its new subway station and bus terminal.

The contemporary transport hub, was commissioned by the Toronto Transit Commission and opened at the end of 2017.  The intermodal transport gateway features a subway, 18 bay bus-terminal and will ultimately connect to the city’s new Highway 407 transitway.

It’s not just it’s scale which is, however, ambitious. The design team AECOM, Aedas and architects Parsons Brinkerhoff, were charged with creating an open and light-filled space, for the most part below ground-level, something which they did with the help of UK-based artist David Pearl, architectural art glass specialists, Proto Studios and Cornwall Glass.

“We were approached by David Pearl, who we had worked with before and who had been commissioned to create the building’s defining 315m2 elliptical sky light, the 100m2 western bus station façade and 200m2 escalator panelling”, says David Proto, Proto Studios.

“Digital print inks are far too opaque, it wouldn’t have delivered the vibrancy and the light that the artist and design team wanted.”

The artwork – called Sky Ellipse – was designed by Pearl, to create a moving projection of colour, following the movement of the sun throughout the day with light filtering down to platform level.

This made choice of printing process and the make-up of the units key. Proto Studios selecting Cornwall Glass as a supply partner because of its expertise in the supply of over-sized units into the commercial glazing sector.

“There are lots of IGU manufacturers out there but most only have experience in domestic supply, so if you’re looking for good commercial IGU suppliers your list comes down to about nine and to do what we wanted to do, just two, Cornwall Glass and one other supplier. With the scale of the installation, a really big factor”, continues Proto.

Measuring 45m X 7m and weighing in at around 14 tonnes of glass, the skylight was designed on an epic scale to bring light to the concourse below. Each IGU measuring 2250 X 1500mm and individually weighing 194kg.

“We scaled-up David’s designs, working out the number of units required and ceramic screen printed each, so that each unit was made up from a 10mm toughened outside leaf with the decorative surface on the inside and a 13mm laminate on the inside of each unit”, continues Proto.

“We printed each leaf individually using a three colour-way process, toughening them ourselves before sending them to Cornwall Glass who made up the units under our supervision, and who ultimately shipped them to Canada for installation.” 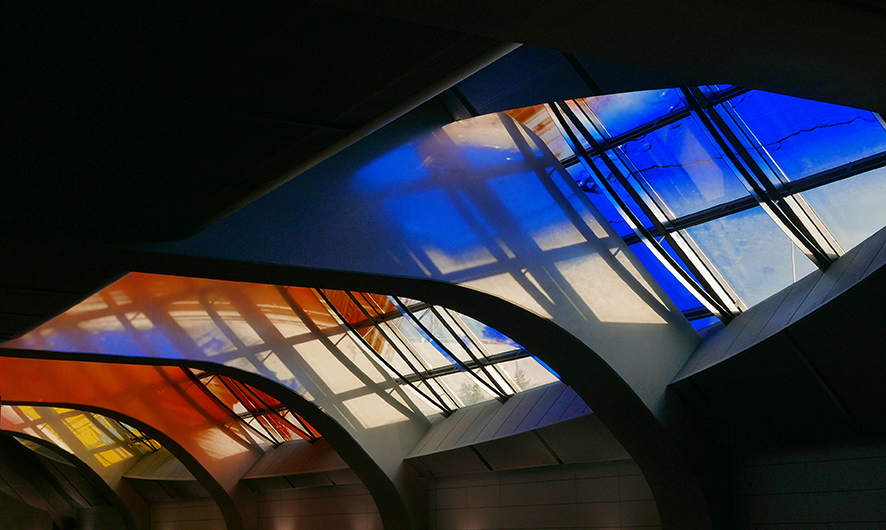 The Highway 407 units were manufactured at Cornwall Glass’ purpose-built IGU and processing facility at Langage, Plymouth.

Going into operation at the beginning of 2016 the state-of-the-art manufacturing hub handles 57 different glass types, ranging from 4mm to 19mm specifications, with capacity to manufacture up to 2000 units each day.

Equipment is cutting-edge. The factory features automated concertina racks and gantry crane and Intermac cutting tables, to process cutting of laminated jumbos in as little as 15-minutes. A CNC means it can carry out shaped work of 3,250mm by 1,620mm. This works alongside a new Adelio Lattuda straight line edger.

The Bystronic line also has capacity to gas fill triple units in the time that most lines will take to fill double units.  The high-speed sealing robot capable delivering of up to 6 litres of polysulphide per minute.

Proto continues: “One of the things we were looking for was an IGU manufacturer who not only had the scale but who also used a polysulphide-based sealing method, which would deliver the reliability we needed in the extreme temperature ranges the IGU’s in the sky-light would be exposed to.

“It was absolutely key for us that we were able to work with an IGU manufacturer who could support us in delivering through life reliability in a high profile commercial application.”